In the age of the Takeover Tour, Twenty-One Pilots has skyrocketed to stardom, not that they weren’t already. I got to go to the United Center show in Chicago, and it was nothing short of fantastic. Spectacular. Emotional. For the first time, I cried during a live show and I still can’t decide if I was emotional because of what Tyler said or emotional because I’ve been in a rough depressive episode lately.

“I didn’t think we would do live shows anymore.”

– Tyler Joseph (to the crowd during Level of Concern)

I Don’t Care Who You Are…

A Little Back Story

“Oh Mom, no! I would never, ever do something like that!”

That Took Too Long

I’m back but it’s been a few weeks since I wrote all that up there. Yes, it’s still that hard for me to talk about and it’s been over five years since we admitted her inpatient to the Adolescent Center. On Mother’s Day weekend no less.

Not too long after her hospital stay (which she found helpful and was grateful for the chance to get professional help), she cut all of her hair off. We saved about 14″ of her hair for “Locks of Love” and she shaved that shit. Now, to know my daughter you would know that even though her hair was long and gorgeous, she never took care of it. I mean, she was only in 8th grade and boys hadn’t ever really given her a second look, so she just didn’t care, but she also went to a private, Catholic middle school hoping that we would okay the transition to a public high school. Reluctantly we did. And I don’t know if that was a good or bad thing – who really knows, you know? We fought so much during her middle school years, it was unbelievable. Her older half-sister didn’t help one bit and ended up moving out of the house right after her graduation party. Her half-sister was verbally and emotionally abusive but we didn’t learn about that until after she was gone. The things Keely told me still make me sick to my stomach that we didn’t notice or hear any of the horrible, nasty things that Ryder told Keely behind closed doors. We haven’t talked to Ryder much since but for a while after she moved, she and Keely kept communication off and on.

Kee was headstrong about being “pansexual, non-binary” and I felt like she had spoken a foreign language to me. I can still remember her explaining this new concept/category to me.

“Mom, it’s not like I’m just bi because that’s more of a sexual preference. This is more of a relationship thing. Remember when you were “gay” in high school and until you met Dad? Remember how you told me that it wasn’t really being a lesbian, but more of you just fell in love with a girl. You just fall in love with who you fall in love with, and it shouldn’t matter if it’s a boy or girl…it’s the person inside. You remember telling us that?”

Oh God I remembered, and I couldn’t believe that she actually took that and ran with it. Did I regret teaching my kids that? I don’t think so but she really had to explain the gender spectrum, identity crisis, and every other new term that kids use these days to identify themselves. I was lost. I’ve always known Derek and I was more open-minded than her friends’ parents (remember, mostly Catholic) and we accepted people without judgment unlike my parents did.

In her sophomore year, she asked her dad and me to refer to her with pronouns. Yes, she wanted us to not say her/she but instead use they/them. I had to laugh and said no, definitely not doing that. Why would I do that? She’s my daughter. I birthed her and know her sex. Apparently, it’s not just about sex or gender anymore. I’m still confused so please don’t ask.

That’s when I started research on the ol’ YouTube and let me tell ya, that was it for me. I read lyrics, watched their funny little Vines, saw the sweet side of both of them through countless interviews, and read theories on DEMA and this entire world that Tyler created.

I read about their mental health struggles and the meaning of the band name – I mean, who knew there were only two members?

I was a goner (pun intended). I haven’t looked back since. I know every lyric to almost every song, even their live versions! I have wrestled with all these demons and Tyler put them down on paper and sung about them, while Josh drummed his little heart out to them.

I couldn’t understand why they weren’t more popular, but then I realized maybe that wasn’t the best thing. Maybe they didn’t need the spotlight or the fame because what they’ve done is so much more than that.

Tyler told everyone to “Stay Alive”. Find something, whatever it means to you, create something that will keep you alive, and work on it for the rest of your life. Make it your passion – your reason for existing. Your purpose.

So when I get down and lately it’s been too much – I think of his words, I listen to their music or watch their clips and laugh at all the wonderful, stupid things they still do. I feel like I know them, which is really kind of sad because they know nothing of me and my daughter. This one group bonded us in a way nothing ever has and we are so much closer. If I hadn’t learned of them and their meaning to her, where would we be? We are able to dissect the songs and lyrics and look for meaning in everything they say. Isn’t that kind of freaky?

We don’t think so. And we will listen to them no matter how big they get because we’ve lived that. I understand why Tyler is passionate about his fans; he knows all of them relate to his past and what he’s been through in some way. He sings about what he understands. He is an old soul and an extremely talented songwriter and performer.

The Takeover Tour was nothing short of impressive and I was so scared they wouldn’t close with the same song. Kee has always asked me, “so which song is your fave now?” I changed my favorites a lot while going through each album and I’m sure I could make a great top 20 list…or TØP 21 list. (You see what I did there?) teehee.

At the end of the day, my fave still ends up “Trees“. It’s like Tyler once said, no matter how tired they are by the end of a show, no matter how little energy they have, when they start that one song, it’s like a whole new set comes on and fires them back up. That’s how I feel when I hear it and hopefully, that feeling will never go away.

So here’s to Twenty-One Pilots and their kick-ass tour. Once again, my boys have outdone themselves and I cannot wait to see what they do next. Much love to you, Tyler and Josh! Thank you for keeping us alive.

We even got “matching” tattoos. Mine is “Stay with me #myBlood” and hers is “…you don’t need to run.” #tears 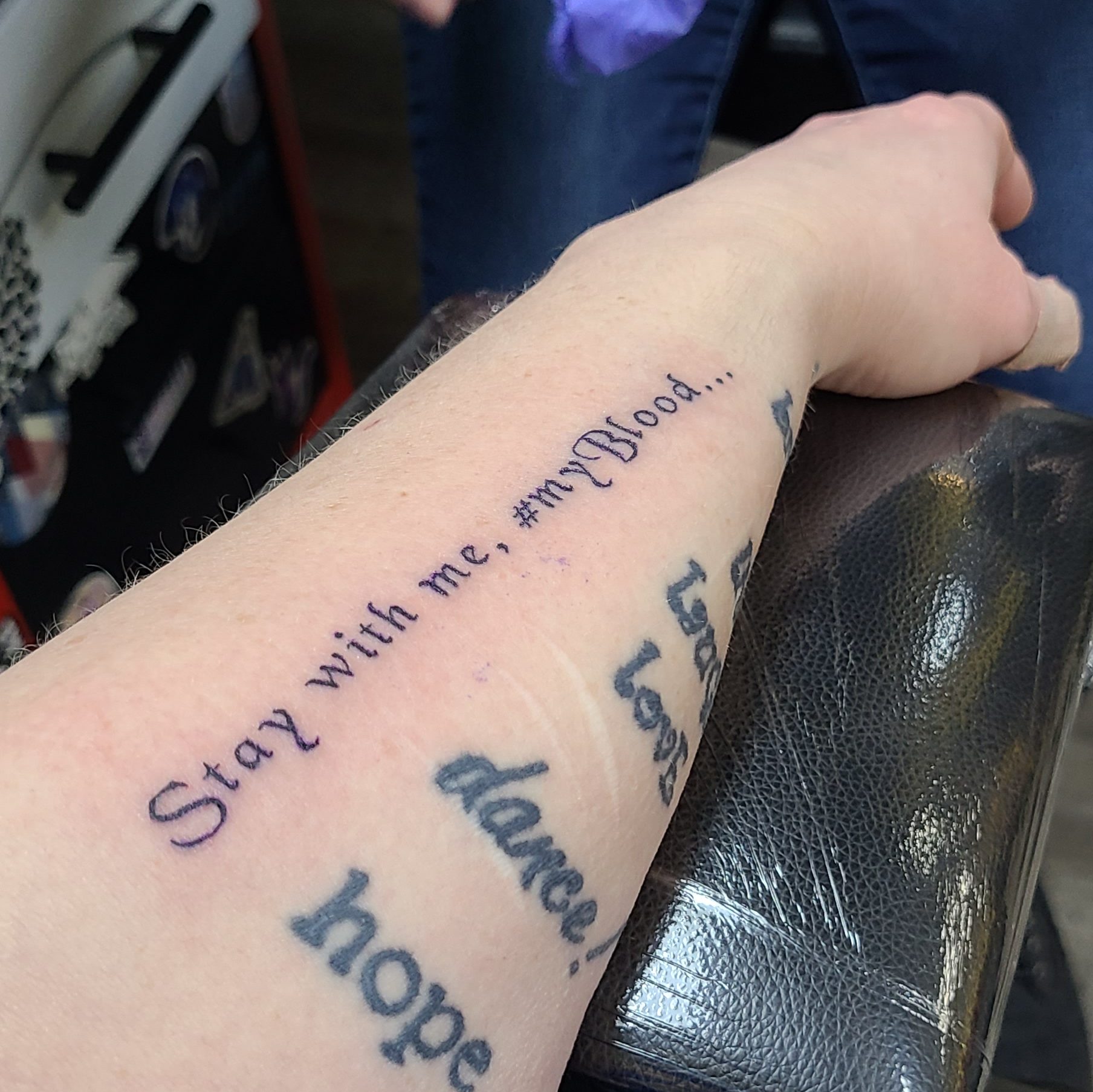 On our way to the first concert, she played this one for me. I hadn’t heard it yet and she said,

Big shout out to Twenty-One Pilots for all they’ve given us. Even though I took some of these pics and videos, I in no way own their lyrics or music or get paid for any of it. It’s simply here to enjoy and share. Thanks!

This site uses Akismet to reduce spam. Learn how your comment data is processed.